You would think someone who’s spent 45 years writing laws (or at least trying to) would believe that laws apply to him. But not so with Bill Nelson. Here’s a quick summary of all the ways Bill Nelson seems to think the law should not apply to him:

It’s clear that our lead is mathematically impossible to close without fraud…so Nelson and his DC lawyers are doing their best to count fraudulent ballots, laws be damned.

As the recount process continues, so do the issues out of Broward and Palm Beach Counties. Get an update on the Scott for Florida’s recent legal filings regarding yesterday’s concerns HERE.

On a related note, for a deeper dive on the misinformation being spread by Bill Nelson and his DC lawyers regarding undervotes, click HERE.

Senator and NRSC Chair Cory Gardner weighed in on the Supervisors of Elections’ blatant disregard for Florida’s elections laws on Sunday’s Meet the Press.

“You have court in FL that says the Constitution of Florida has been violated.”

…and echoed what Bill Nelsons’ and his liberal lawyers can’t seem to grasp – Rick Scott won.

“This will be an election we will be proud of and an election that we were able to protect the voters in.”

In case you missed it, Senator-Elect Scott joined Chris Wallace on Sunday to discuss the ongoing recount and how he will work to reform Washington. You can see that interview here:

Tweets of the day, from Sunday: 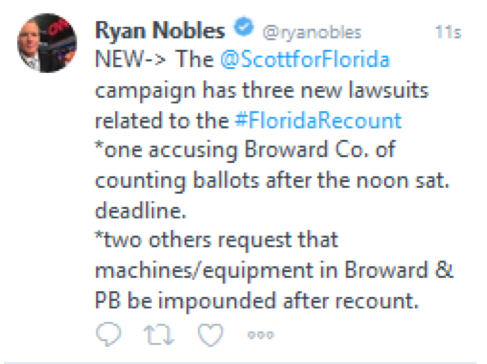 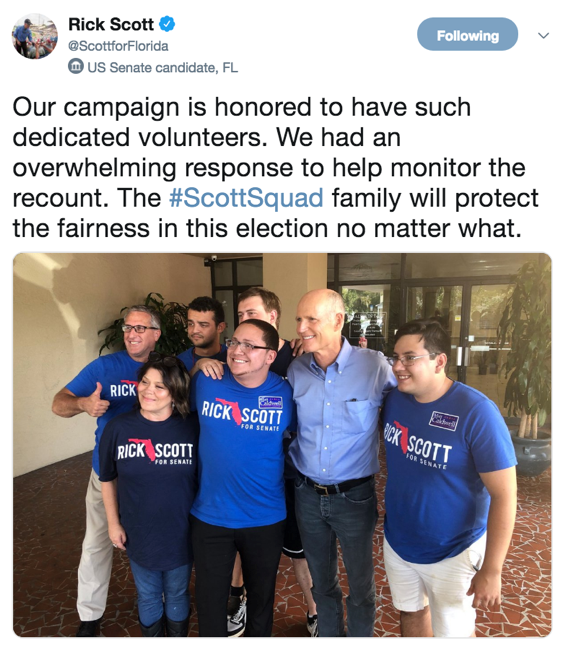 And we close with this daily reminder: Senator-elect Rick Scott won the race by 12,562 votes. This margin is 5 times the largest shift during a recount in American political history. And Bill Nelson can decline the recount at any time.

2K Shares
Prev Story Recount Update: Day 1
Next Story ICYMI: “We won the election. I'm looking forward to being up there”