Judge Walker also dismissed a lawsuit brought by the League of Women Voters and other liberal groups.

As CNN’s Ryan Nobles put it, “the path to victory for Bill Nelson is quickly narrowing.” Playing whack-a-mole in court to knock down lawsuit after lawsuit (I think the Dems are up to 9 now) certainly isn’t how we had hoped to be spending the week after election day. But you have to ask yourself, is playing a mole getting whacked in court really how Bill Nelson wanted to spend the week after election day?

After the 3pm deadline passed yesterday and our campaign actually INCREASED our margin over Bill Nelson, Senator-elect Scott released the following statement:

Senator-elect Rick Scott said, “Last week, Florida voters elected me as their next U.S. Senator and now the ballots have been counted twice. I am incredibly proud and humbled by the opportunity to serve Florida in Washington. Our state needs to move forward. We need to put this election behind us, and it is time for Bill Nelson to respect the will of the voters and graciously bring this process to an end rather than proceed with yet another count of the votes – which will yield the same result, and bring more embarrassment to the state that we both love and have served.”

With so much going on yesterday, it seemed like the biggest story of the day got lost in the shuffle, a bit.

But it gets worse. According to activists in the know, they did this purposefully in hopes that a judge would rule to eventually include ballots cured after election day.

One Palm Beach Democratic activist said in an interview the idea was to have voters fix and submit as many absentee ballots as possible with the altered forms in hopes of later including them in vote totals if a judge ruled such ballots were allowed.

It’s hard to look at this as anything other than a coordinated effort by the Florida Democratic Party and the Nelson Campaign to fraudulently mislead voters to submit invalid affidavits and then argue in court that absentee ballots cured late should count.

Yesterday, in response to this story, Scott for Florida Campaign Manager Jackie Schutz Zeckman called on Bill Nelson to immediately demand the resignation of the Florida Democratic Party Chair.

“News reports yesterday and today revealed that the Florida Democrat Party engaged in an illegal scheme to alter election forms and deceive voters regarding the deadlines for submitting votes. Democrats even admitted plans to fraudulently mislead voters in anticipation of including ballots submitted after the legal deadline if they could convince a judge to disregard Florida election law. Federal prosecutors are also investigating this clear example of voter fraud by the Democrat Party in Florida.

“Senator Nelson can either stay silent and be in favor of organized voter fraud by the Democrat Party, or he can do the right thing and demand the immediate resignation of Florida’s Democrat Party Chair.” –Jackie Schutz Zeckman, Scott for Florida Campaign Manager

This seems like the obvious thing to do – unless, of course, Bill Nelson has no problem with the fraud committed by the Florida Democratic Party.

Tweets of the day, from Thursday: 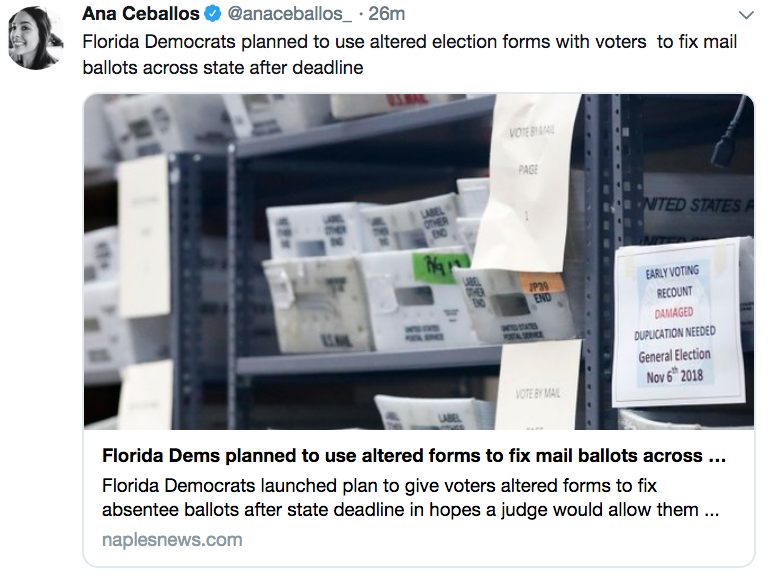 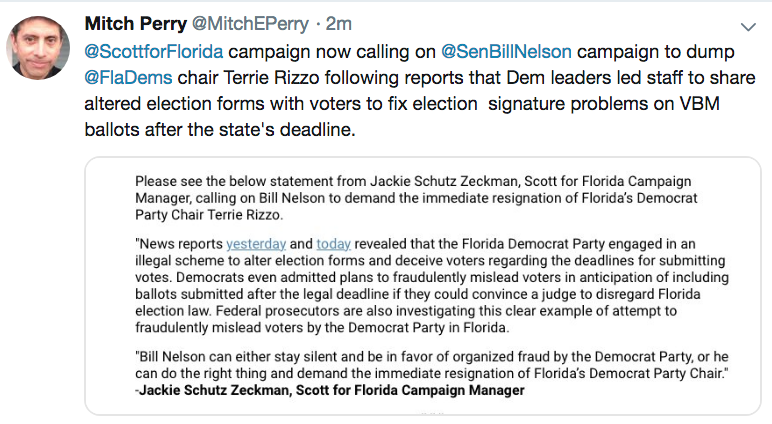 Scott for Florida Raises More Than $1.4 Million for Recount Efforts

2K Shares
Prev Story Senator-elect Scott: Our State Needs to Move Forward
Next Story PSA for Bill Nelson: It's Over