“Sen. Bill Nelson has run out of time, run out of favorable court rulings and is about to officially run out of votes.

‘It’s done. But it was done before today. This was a total Hail Mary,’ said a top Democrat involved in Nelson’s campaign who didn’t want to speak publicly before the Democratic Party icon conceded defeat to one of the party’s most-hated rivals.”

“Scott’s defeat of Nelson certifies him as a Democratic giant-killer who continues to prove party elites wrong. In three straight elections, Democratic insiders have predicted his defeat. Scott first beat Alex Sink, the woman once thought to be the future of the party, in his first gubernatorial race. Then he defeated former Gov. Charlie Crist, a once-highly popular governor. And now he has bested the one politician Democrats thought was unbeatable in a Florida general election, Nelson.”

As of this morning, almost all the overvotes and undervotes have been recounted across the state, including in Orange, Miami-Dade, Alachua, Palm Beach and Broward Counties.

As we reported last night, pursuant to a public records request from our campaign, the Broward County Supervisor of Elections provided the results from their manual recount. While almost 1/3rd of undervotes in the state were in Broward County (31,000) there were only 500 new ballots counted, netting Bill Nelson less than 300 votes.

Our statement from last night:

“According to Bill Nelson’s D.C. lawyer, a hand recount of Broward County votes would miraculously result in thousands of new Bill Nelson voters. Now we know that’s not the case. The numbers are in and the votes have been counted. Rick Scott was elected to the U.S. Senate by a close but decisive margin. It’s time for Bill Nelson to finally accept reality and allow the state of Florida to move forward.” – Chris Hartline, Scott for Florida Spokesman

Tweets of the day, from Friday: 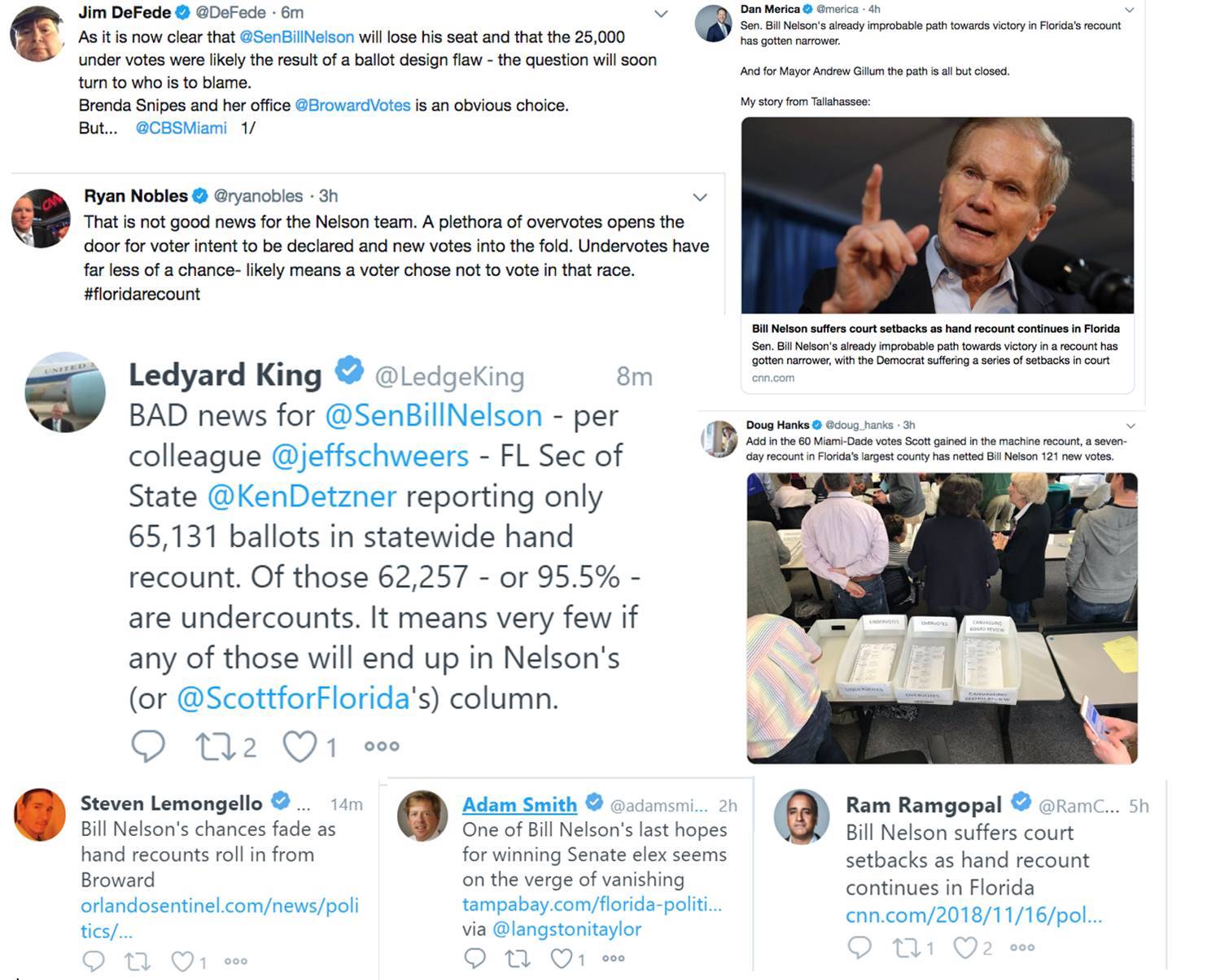 And as a bonus – if anyone knows Bill Nelson, please pass along these headlines…

Florida Today:  Florida recount: Hand recount complete in Broward in what is not a good sign for Nelson

BuzzFeed: Here’s What’s Happening In The Florida Senate Race — And Why The Republican Will Probably Win

Tampa Bay Times: Bill Nelson adds some votes, but not many, in drama-free manual recounts across Tampa Bay

Scott for FL Letter to Dept of State

PSA for Bill Nelson: It’s Over